Spirit of the Danube, first Stage V Rivercruiser in service

Spirit of the Danube, first Stage V Rivercruiser in service

Commissioned by Rijfers Nautical Management (RNM), shipyard Vahali has delivered the ship ‘the Spirit of the Danube’ as a ‘turn key’ project. It is the first river cruiser in Europe to be Stage V certified. The Spirit of the Danube is 135 meters long, 11.45 meters wide, and has a crawl line for 5.85 meters. There is room on board for 190 passengers and 50 crew members. The vessel has been chartered by UK tour operator Saga Holidays under a multi-year deal and will sail on the Danube for the remainder of this year. The keel of the Spirit of the Danube was laid in November 2020 and the outfitting started in Gendt in June 2021. The ship was christened on March 19 in Arnhem and also received her Green Award Gold on this date. 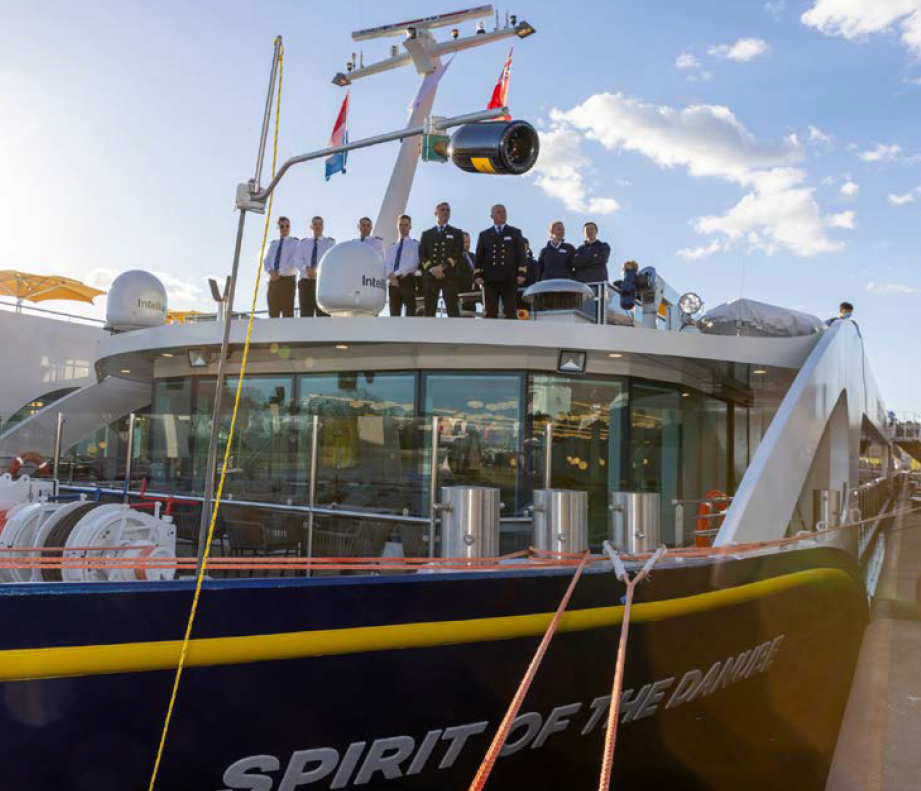 The Spirit of the Danube is equipped with 4 main engines. Using 4 smaller engines instead of 2 larger engines has several advantages. For example, the rudder propellers are equipped with smaller propellers (1.10 meters instead of 1.55 meters), so the ship can sail longer at low tide. Furthermore, a ship with 4 propulsion engines is more reliable than a double scrubber. Besides that, the smaller engines together have lower fuel consumption and cause less noise and vibration than the double-screw variant with larger engines. The bow thruster motor and generators are also of the same type. The advantage is that we need fewer spare parts on board. Moreover, the rear part of the superstructure is created of aluminum instead of steel. As a result, we save the necessary kilos and centimeters to be able to sail on all water levels.

At the moment, the hull of the Alisa, our next new-built vessel, is being finalized in Serbia. This ship has a different appearance but shares the technical side with the Spirit of the Danube. The Alisa will sail for the German travel company Phoenix Reisen and will be delivered in early 2023. With six ships in the building stage, a seventh on the way, and two existing ships, RNM is extremely busy. The Spirit of the Danube, like the other ships, will be under the nautical and technical management of Rivertech, and the hotel/catering area will be managed by SeaChefs from Hamburg.

Veth Propulsion has been a reliable supplier of European inland shipping for many years. They are now the market leader in passenger shipping in the field of propulsion systems such as thrusters and bow thrusters. Veth Propulsion also supplied and installed the thrusters (rudder propellers) and bow thruster on the Spirit of the Danube. Veth also supplied and installed eight Scania DC13 Stage V engines (368 kW, 500 hp) with catalytic converters. These Scania engines have already been tested in road transport and have been adapted for use in inland vessels. For example, double-walled fuel lines have been installed and the software has been expanded. The systems consist of compact modules and are designed in such a way that we do not have to use an afterburner or compressed air in the exhaust process to let the catalyst do its work.